I have remove the active link to it as it may have caused a visitor's machine to crash but it has given me no trouble.

Email ThisBlogThis!Share to TwitterShare to FacebookShare to Pinterest
Labels: Quotes

The Chicken and The Egg.

My highly unscientific blog poll found 8 votes in favour of the chicken coming before the egg and 9 votes giving the race to the egg.

I take a simple, evolutionary, view:

Conclusion: The egg came before the chicken.

Email ThisBlogThis!Share to TwitterShare to FacebookShare to Pinterest
Labels: stuff

Boneman has a fancy doo-dad on his site that lets me go off and find that there are 216 people with my name in the USA. How common!

But what caught my attention was the next little window:

Am I showing my age? I would have thought John F. Kennedy would rate in top 5 famous Kennedys in the US. No offense to Adam, George and Jimmy but I have never heard of them.

Email ThisBlogThis!Share to TwitterShare to FacebookShare to Pinterest
Labels: trivia

Second sip from the bottle... 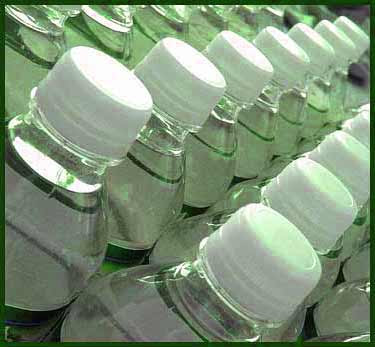 People are getting the wrong idea. When I said that for every five litres of water you consume you consume one litre of crude oil I wasn't meaning that you physically drink the crude oil.

What is the bottle made out of? Crude oil.

What powers the vehicles that ship the water around the planet? Crude oil.

People seem to forget that we use crude oil for far more than just running our cars.

All our plastics are made from crude oil. As are our paints, resins, pigments, synthetic fibres (nylon, polyester etc), most pharmaceuticals, many building products and laminates, glues & adhesives, pesticides, asphalt and rubber.
...
Posted by Lee at 16:01 4 comments:

Going down the gurgler. 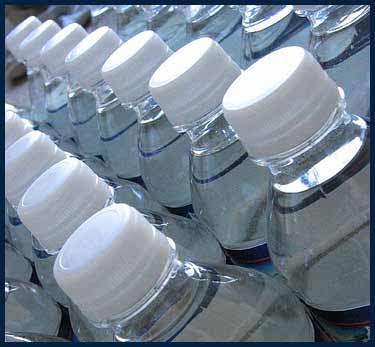 For every five litres of
bottled water you drink
you consume
one litre of crude oil.
...
Posted by Lee at 22:05 10 comments: 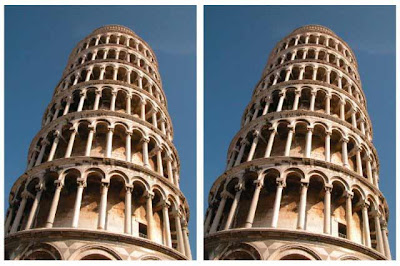 These two photos are identical. The right hand one is a direct cut and paste of the left.

So why does it slant more than the left?

For that matter, the right hand photo looks to have a darker sky. Curious. 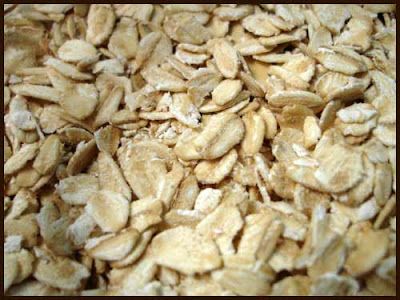 Today is our 26th Wedding Anniversary.

Now I've looked through all the lists of anniversary types - Traditional, British, American, Modern but cannot find a 'thing' that is associated with 26. I'm sure someone like a department store could suggest one - leaf blower anniversary maybe, or perhaps the waffle iron anniversary.

In the absence of anything to guide me I have nominated it, the 26th anniversary, as the oat anniversary.

That, by association, puts it as the porridge anniversary.

Let's just say it is warming, sustaining and symbolic of having been through times both lumpy and smooth.
Posted by Lee at 15:46 23 comments:

Email ThisBlogThis!Share to TwitterShare to FacebookShare to Pinterest
Labels: wedding 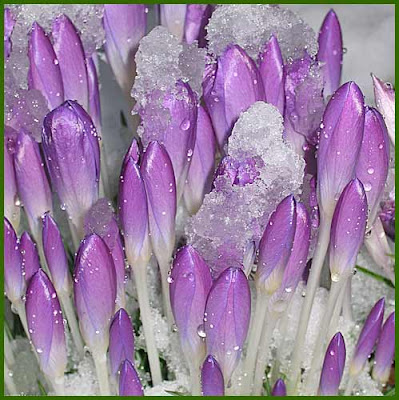 Sometimes things don't go, after all,
from bad to worse. Some years, muscadel
faces down frost; green thrives; the crops don't fail.
Sometimes a man aims high, and all goes well.

A people sometimes will step back from war,
elect an honest man, decide they care
enough, that they can't leave some stranger poor.
Some men become what they were born for.

Sometimes our best intentions do not go
amiss; sometimes we do as we meant to.
The sun will sometimes melt a field of sorrow
that seemed hard frozen; may it happen for you.

Skill is successfully walking a tightrope over Niagara Falls.

Intelligence is not trying.

Email ThisBlogThis!Share to TwitterShare to FacebookShare to Pinterest
Labels: humorous

So far so good! 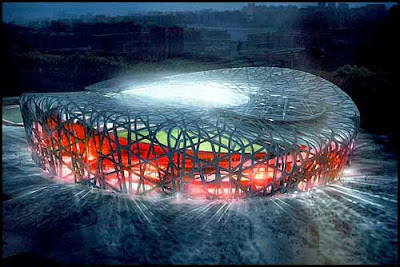 We have heard from Simon, safely installed in Beijing.

Email ThisBlogThis!Share to TwitterShare to FacebookShare to Pinterest
Labels: Simon

Those of you who suspected the text I presented two posts ago was related to cold reading were correct.

Wikipedia: In 1948, psychologist Bertram R. Forer gave a personality test to his students, and then gave them a personality analysis supposedly based on the test's results.

He invited each of them to rate the analysis on a scale of 0 (very poor) to 5 (excellent) as it applied to themselves: the average was 4.26. He then revealed that each student had been given the same analysis, which was the text that was in that last post.

Later studies have found that subjects give higher accuracy ratings if the following are true I embellished the list slightly by adding the J (the most common male initial), M (the most common female initial) and the 2 (statistically more likely to be in house numbers, ages, etc than other numbers.)
...
Posted by Lee at 21:12 4 comments:

There is an influenza epidemic in Australia at the moment.

I don't mean the common cold, which a lot of people call the 'flu. I mean the genuine article.

But this morning, through my sleepy fog, I heard "Lee...Lee...Lee..." coming plaintively from the bathroom. A quick exploration found a shaky, cold, clammy and somewhat dizzy Margaret on the floor. Achy and tingly, too. I got her back to bed, explored my options with an phone nurse and decided to take her to the emergency centre at the local hospital.

We got there about 8:30am, were seen by a nurse at 10:30am, seen by a doctor at about 2:30pm. I was starting to wish I had left her in bed. Overall she had picked up over the day. The doctor had one last query about whether she had meningitis. (She had a stiff neck and a headache but had spent most of the night in a recliner rocker to ease her coughing which probably did her neck no good and the headache? Well, she has the 'flu...) While I appreciate his desire to be thorough we would still be there if we hadn't said 'no' and we left with a promise that we would return if any symptoms of meningitis appeared.

Nothing quite stuffs your day as comprehensively as nine hours sitting in casualty.

Email ThisBlogThis!Share to TwitterShare to FacebookShare to Pinterest
Labels: medicine 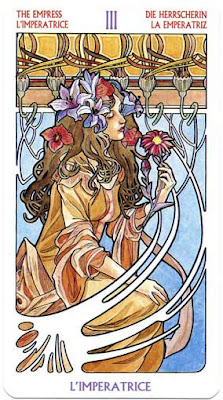 This is an attempt at psychotarot blogging.

I have selected one of you as a subject, you will know who I mean.
I have shuffled the cards, and this is what they say:

You have a need for other people to like and admire you, and yet you tend to be critical of yourself.

While you have some personality weaknesses you are generally able to compensate for them.

You have considerable unused capacity that you have not turned to your advantage.

Disciplined and self-controlled on the outside, you tend to be worrisome and insecure on the inside.

At times you have serious doubts as to whether you have made the right decision or done the right thing.

You prefer a certain amount of change and variety and become dissatisfied when hemmed in by restrictions and limitations.

You also pride yourself as an independent thinker; and do not accept others' statements without satisfactory proof.

But you have found it unwise to be too frank in revealing yourself to others.

Some of your aspirations tend to be rather unrealistic.

The letters J and M and the number 2 hold special significances for you.

After hearing from my cousin, Undine, I have added to the post about my aunt, Christa, four posts back.
Posted by Lee at 16:25 1 comment:

Email ThisBlogThis!Share to TwitterShare to FacebookShare to Pinterest
Labels: family 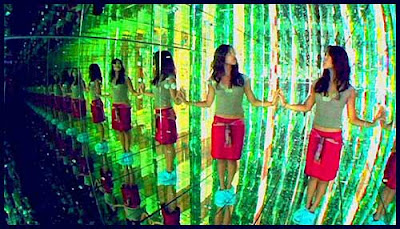 Long ago in a small, far away village, there was place known as the House of 1000 Mirrors.

A small, happy little dog learned of this place and decided to visit. When he arrived, he bounced happily up the stairs to the doorway of the house. He looked through the doorway with his ears lifted high and his tail wagging as fast as it could. To his great surprise, he found himself staring at 1000 other happy little dogs with their tails wagging just as fast as his. He smiled a great smile, and was answered with 1000 great smiles just as warm and friendly.

As he left the House, he thought to himself, "This is a wonderful place. I will come back and visit it often."

In this same village, another little dog, who was not quite as happy as the first one, decided to visit the house. He slowly climbed the stairs and hung his head low as he looked into the door. When he saw the 1000 unfriendly looking dogs staring back at him, he growled at them and was horrified to see 1000 little dogs growling back at him. As he left, he thought to himself, "That is a horrible place, and I will never go back there again."

All the faces in the world are mirrors.

What kind of reflections do you see in the faces of the people you meet? 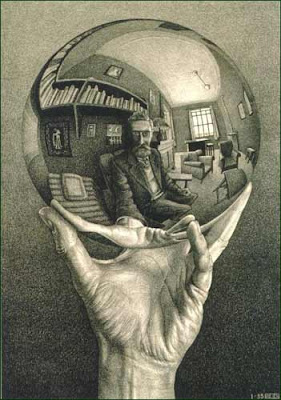 Our baby is flying the nest! 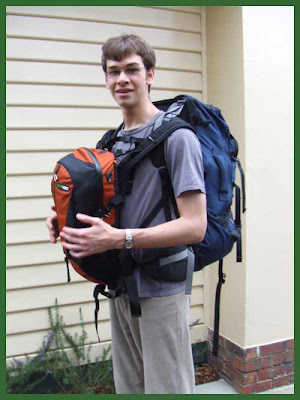 Simon, 19, tries out his packs this afternoon before heading off to see the world for six months.

We are just back from leaving him at the airport, ready to head off on the first leg of his travels: Beijing. He will live there with a family for a month while doing an intensive Chinese course. From there he will travel a bit before heading to Paris in late September to live with a family there for a month while doing an intensive French course. He will then wander a bit, spend Christmas in Scotland, wander a bit more and reappear in our lives early February 2008.

Being the youngest of our sons there is a little apprehension in the maternal ranks. 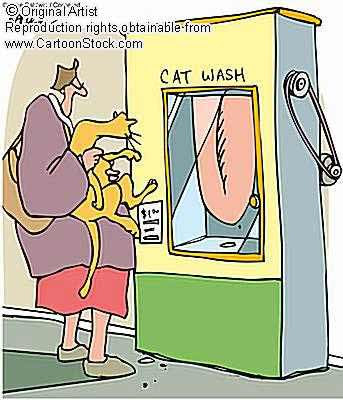