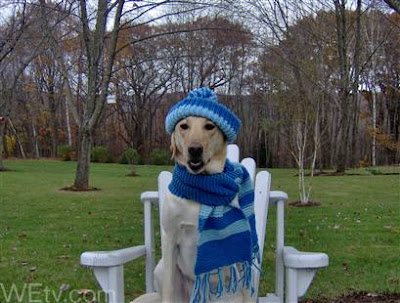 What we can learn from a dog:

Remember, if a dog was the teacher you would learn things like:

When loved ones come home, always run to greet them.

Never pass up the opportunity to go for a joyride.

Allow the experience of fresh air and the wind in your face to be pure Ecstasy.

Avoid biting when a simple growl will do.

On warm days, stop to lie on your back on the grass.

On hot days, drink lots of water and lie under a shady tree.

When you're happy, dance around and wag your entire body.

Delight in the simple joy of a long walk.

Never pretend to be something you're not.

If what you want lies buried, dig until you find it.

When someone is having a bad day, be silent, sit close by, and nuzzle them gently.

After I retired, my wife insisted that I accompany her on her trips to Target.

Unfortunately, like most men, I found shopping boring and preferred to get in and get out. Equally unfortunate, my wife is like most women - she loves to browse.

Yesterday my dear wife received the following letter from the local Target.

Over the past six months, your husband has caused quite a commotion in our store.We cannot tolerate this behavior and have been forced to ban both of you from the store.

Our complaints against your husband, Mr. J.Hudson are listed below and are documented by our video surveillance cameras.

1. June 15: Took 24 boxes of condoms and randomly put them in other people's carts when they weren't looking.

2. July 2: Set all the alarm clocks in Housewares to go off at 5-minute intervals.

3. July 7: He made a trail of tomato juice on the floor leading to the women's restroom.

4. July 19: Walked up to an employee and told her in an official voice, 'Code 3 in Housewares. Get on it right away?. This caused the employee to leave her assigned station and receive a reprimand from her Supervisor that in turn resulted with a union grievance, causing management to lose time and costing the company money.

5. August 4: Went to the Service Desk and tried to put a bag of M&Ms on layby.

7. August 15: Set up a tent in the camping department and told the children shoppers he'd invite them in if they would bring pillows and blankets from the bedding department to which twenty children obliged.

8. August 23: When a clerk asked if they could help him he began crying and screamed, 'Why can't you people just leave me alone?' Police were called.

9. September 4: Looked right into the security camera and used it as a mirror while he picked his nose.

10. September 10: While handling guns in the hunting department, he asked the clerk where the antidepressants were.

11. October 3: Darted around the store suspiciously while loudly humming the ' Mission Impossible' theme.

12. October 6: In the auto department, he practiced his 'Madonna look' by using different sizes of funnels.

13. October 18: Hid in a clothing rack and when people browsed through, yelled 'PICK ME! PICK ME!'

14. October 21: When an announcement came over the loud speaker, he assumed a fetal position and screamed 'OH NO! IT'S THOSE VOICES AGAIN!' And last, but not least: 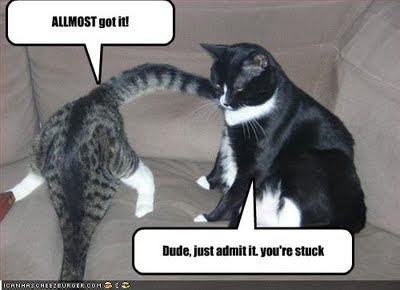 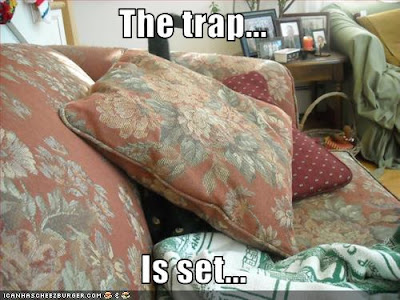 This, or a version of it, was in the pre-Father's Day junk mail today.

Apparently, after you push the snooze button, it rolls away somewhere in the room and, once the snooze period is over, you have to get up to find it. 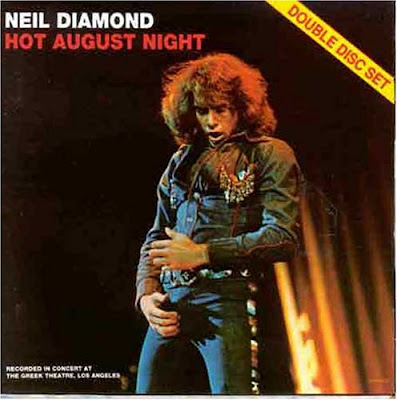 Late Saturday night was the hottest August night on record in Melbourne.

Climate change? How could I even dream of suggesting such a thing.
...
Posted by Lee at 09:56 3 comments:

Email ThisBlogThis!Share to TwitterShare to FacebookShare to Pinterest
Labels: climate

No, not in this belly button.

From the fluffy edge of scientific research I can tell you that the belly button above will be fluff repellent. Consider the following research abstract:

"Hard facts on a soft matter! ... The hypothesis presented herein says that abdominal hair is mainly responsible for the accumulation of navel lint, which, therefore, this is a typically male phenomenon.

The abdominal hair collects fibers from cotton shirts and directs them into the navel where they are compacted to a felt-like matter. The most abundant individual mass of a piece of lint was found to be between 1.20 and 1.29 mg (n=503). However, due to several much larger pieces, the average mass was 1.82 mg in this three year study. When the abdominal hair is shaved, no more lint is collected. "

From the materials and methods: "The author first observed the accumulation of navel fluff in his early 20s. Despite thorough body hygiene including a daily morning shower, the navel filled with lint over the day. The author collected 503 pieces of navel fluff since approximately March 2005 with a total weight of almost 1 g... ...In order to investigate the role of the abdominal hair, the author also shaved his belly for this study."

Email ThisBlogThis!Share to TwitterShare to FacebookShare to Pinterest
Labels: science 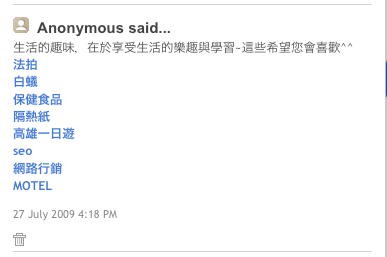 Been getting a bit of spam happening of late so I have put on limited moderation; it cuts in once a post is over three days old. Most of my 'regulars' have commented by then so it should be little inconvenience. Hope that's the case.

But what do they hope to gain spamming in Chinese (?) to a site clearly frequented by people who can read English?

Email ThisBlogThis!Share to TwitterShare to FacebookShare to Pinterest
Labels: spam 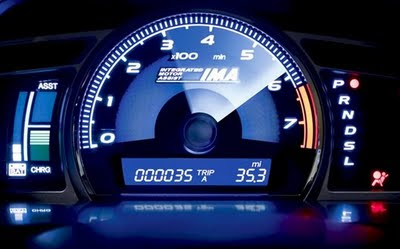 Chairman Bill was asking about the hybrid and whether it really saves fuel.

Hard to tell because my 'normal' cars never gave me mileage details and I was too disinterested to figure it out.

The daily run for the car is only about 10km each way to work. Abt 6miles. And I have found that that is not really enough to get full benefit as petrol engines use less fuel once they warm up. It tends to run out at 7.2 litre/100km (abt 39 miles to the imperial gallon, 32 miles to the US gallon.) On a longer freeway sort of run it is down at about 5.5 litre/100km (51/42).

It doesn't use the engine to charge the battery. When the car is coasting, down hill say, the charger hops in a little and it participates strongly when braking. Acts as a type of engine brake.

The electric motor assists during acceleration.

The wierdest thing is that the engine stops when you do. Stop at the lights and the engine turns off; when you take your foot off the brake, it restarts and is up and running before you get to the accelerator. I am assuming that it is the electric engine that powers this start up.

The engine shut down is OK at the lights. It is wierd when you are waiting to turn against on-coming traffic. There you are in the middle of the intersection, waiting to turn, and your engine turns off! An act of faith that it will start and get you oput of there!