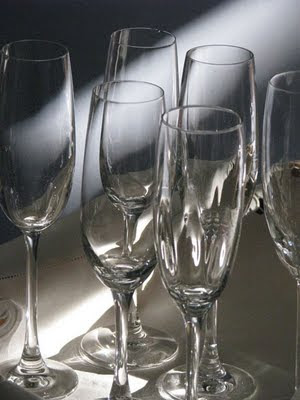 We watched the Royal Wedding.

Champagne, Crown Roast, vegetables and Queen of Puddings. That made it worth it.

You cannot beat the British for pageantry. And that was worth it too.

But the service touched no chords - as an atheist, it made no sense at all.

And The Age, dumb as ever, had a headline this morning "And now the fairytale begins!".

Didn't anyone tell them that fairytales end when the prince marries the princess?
...
Posted by Lee at 16:31 12 comments:

A bird by any other name... 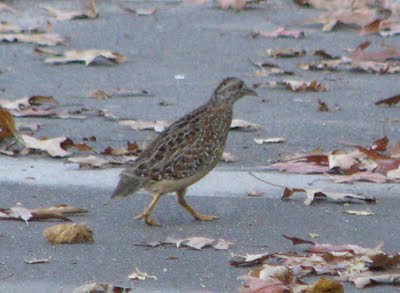 Strange bird that stalks around my front garden.

Anyone know what it is?

But what to eat? 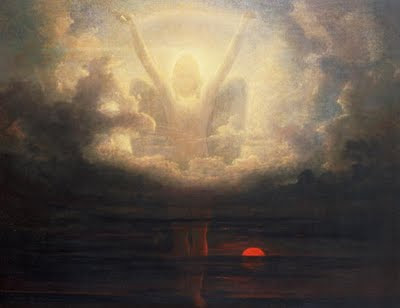 I only recently learned that May 21st is Judgement Day.

Yeah, May 21st this year. Doesn't give me a lot of time to study.

You can get some details here.

And the End of the World is apparently pencilled in for five months later. Presumably it takes that long to do the paperwork, get the permits from council and the EPA, that sort of thing.

But, one thing at a time.

Judgement Day, May 21st, is a Saturday. I always have a three course dinner on a Saturday. 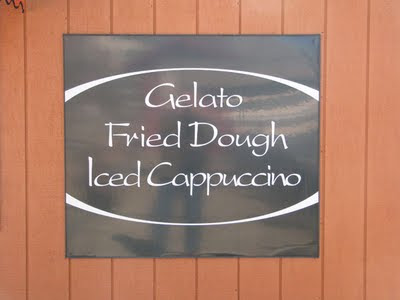 Email ThisBlogThis!Share to TwitterShare to FacebookShare to Pinterest
Labels: language, US

Home again but I think I passed my brain, still heading east, on the way back.

When checking in to Chicago airport, they scanned my carry-on bag. The operator and another guy look closely at the screen and then a guy with blue gloves came up and said "Is this your bag?", "Yes", "I want to inspect it, come over here".

So I collected shoes, belt and computer and followed him over there.

"Before I open it Sir, is there anything sharp in here that may cut me?"

"Please do not touch the bag while I inspect it".

He rummages and comes up triumphant with what had caught the attention of the x-ray guy.

"It's the power cord for the computer I am holding." 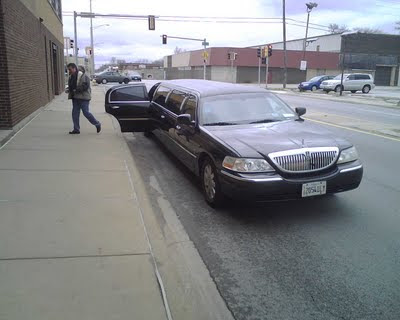 The business side of the visit is over. Today, a visit to the local lab in the morning. The picture is of the car that took us. In Australia, we have a company pool car. In the US, the company car has a pool. And is probably bulletproof.

Speaking of which, I have been in the US three days and have seen no shoot outs and not even heard a decent burst of gunfire in the middle of the night.

The local lab was very impressive.

Yesterday was chilly. Today also chilly. My ‘ear-freeze-index’ suggests that they were comparably chilly.

Lunch was a ‘chicken sandwich’ that would have supported a small African village for a week. Didn’t even think about trying to finish it.

Some quite lovely architecture around the city – 1920s or thereabouts, I think. And some impressive modern stuff too.

The streets are very clean, even in areas that I was told are ‘bad’ areas.

At Boneman's suggestion, I visited the Institute of Art. An impressive collection of work. As always, visiting a gallery makes me itch to take up the brushes again. Usually, by the time I have found my way home again, the itch has subsided.

At dinner tonight I was offered a black serviette as I was wearing dark trousers. First time I have met a restaurant that tries to colour co-ordinate your serviette.

The restaurant had a ‘club’ you could join, earning points from each visit. They offer club members a complimentary lobster on their birthday. I have Lewis Carroll-esque visions of a lobster on my plate saying “My, you are a handsome brute!’

Found the secret to the coffee situation. When the waiter says “Would you like coffee?” Under no circumstances say “yes” as no further negotiations are entered into and they vanish, only to reappear with a mug of wet, brown, odourless liquid. The only sensible response to their question is a further question: “Do you have espresso?”. Then you are in with a fighting chance.

Didn't get out of the hotel today.

Weather so bad I couldn't even see out of the hotel today.

Woke to find a light dusting of snow around the place. Most of it disappeared pretty quickly. Cloud around some of the buildings, esp Trump Hotel. Perhaps a symbolic nebulous hairdo.

Was reading the room service breakfast thing that you hang on your door if you want delivered breakfast (I didn’t but there was nothing on the 55 channels of TV). The “American Breakfast” included a choice of fresh eggs and protein with potatoes. Funny my textbooks said eggs were largely protein. The options of protein were bacon, sausage and ham.

Had a DIY continental breakfast down on the concourse. The principle sources of protein that were available there were sliced cold meat and cheeses.

Saw an open top double decker bus going around the place – no takers to ride upstairs.

First day of the meeting was interesting, with some folk a lot more intense and earnest than others. All terribly keen to save money.

Was taken on a tour of head office – for some reason I felt that, as it was arranged for us to spend an hour looking at it, it would be something special. Art deco, maybe. Or high tech perhaps. But it was an enormous cubical farm. Dilbert lives.

First leg, Melbourne to LA, was in an A380, a flying ocean liner. But everything was new and working. Staff very attentive. Had a pumpkin and gorgonzola pizza snack in the middle if the ‘night’ that was far too nice. Going to have to experiment when I get home.

First flight in 35 years of airline safety presentations where something had changed – the seatbelts are like those in cars, with a button to push in rather than a flap to lift.

It took two and a half hours to negotiate Immigration & Customs at LA, not helped by having to claim and recheck-in my luggage. The Chicago flight was boarding when I got to it.

The American Airlines flight to Chicago was a cattle run. I think the plane was relatively new model (767) but, like the company pool car, it had seen better days and suffered from too many drivers.

Had to buy food on the AA flight - $10 for a lettuce and sliced beige stuff that may have been meat sandwich. Filled a gap, whatever it was.

Taxi driver was a lady, Gladys. Asked if she was a local – no, she replied, I come from Ghana. Ok, have you been here long? 20 years. Tough market to break into.

The town and suburbs have a distinct cream look to them – presumably the local sandstone but even the house seemed to be made of cream bricks. (Peter Bryenton: Beige!)

The hotel is nice. Swissotel, Chicago. Room on the 38th floor, so a good view. Must take a photo of the Navy Pier tomorrow – the lift lobby looks out over it. Looks a cross between Luna Park and Brighton Pier.

The lift lobbies have a keypad – you punch in the floor you want to go to and a lift arrives and takes you there. There are no buttons in the lift. Not sure what happens if you have a group with multiple floors. For future reference, if you select “G”, you will go to the garage, not ground.

A light dinner in the Palm Restaurant – don’t know why Palm. Saw lots of palms at LA but I suspect they are not native to the Great Lakes.

The meal, (Caesar salad, I wasn’t ready for anything else) came with a bread basket that had fruit bread in it. Went surprisingly well with a bottle of IPA (Goose Island) beer.

Coffee is awful. But it does occasionally get worse. The coffee on the plane (free, but with good reason) was a dark brown liquid with few redeeming or even identifying features. ‘Cream’ is invariably powdered stuff.

In the room is a contraption like the Nespresso that takes bigger (Gloria Jean) capsules and produces a weaker coffee. Some of the capsules are called “Breakfast Blend Decaf”; of all the times in my day when I don’t need decaf, breakfast is it. What are they thinking? Might give the “English Breakfast Tea” capsules a go in the morning.

Finally, in my coffee survey of middle America, I had a coffee after my meal. It came far too fast to have been made fresh. Sure enough when I was nearly finished the waiter turned up with a Thermos jug, asking if I wanted more. That’s where the breakfast coffee went.

Email ThisBlogThis!Share to TwitterShare to FacebookShare to Pinterest
Labels: Chicago, US, work

Have made it to Chicago, although I think my brain is still somewhere mid-Pacific. Maybe that's why Frank sang about 'that toddlin' town'.

It seems like only 28 hours since I got up to go to the airport.

A bit of useless trivia. Except for me. 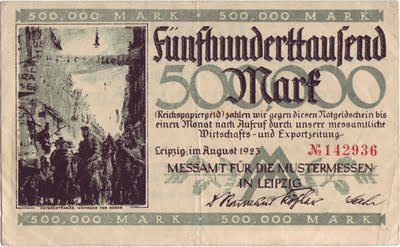 This is a 500,000 Mark note. Deutschmark. Probably not worth much at the time.

Sometime overnight tomorrow, I will hit the 500,000 mark.

Amazing what you can do without really trying. 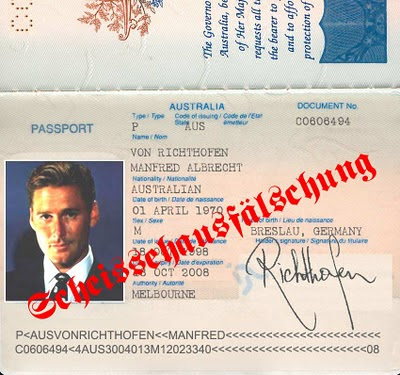 Perhaps I wont use this passport but entering a travel phase - off to Sydney tomorrow to sit in on an audit and the Chicago trip approaches quickly, Sunday week.

Boneman said he liked the Institute of Art in Chicago, I see it is only a 15min walk from my hotel.

Seems the CSIRO attracts them...

The first and last in this list would have had an interesting time at school.
...
Posted by Lee at 13:57 4 comments:

Someone from IT put a sign on the photocopier saying:

"We have uploaded voice recognition software. If you want to use the photocopier just place your document on the machine and say "COPY" clearly and loudly."